On Saturday we got tired of boredly staring at each other and decided to leave the house. Our destination: Thanksgiving Point Gardens. None of us had gone before and as I tend to geek out with plants and gardens in general it sounded like a good fit. (Is it silly to say that one of my favorite parts was the demonstration tomato garden? I was feeling slightly smug that none of their full sized tomatoes were ripe yet either). The Blue Prince just kept sighing with pleasure about how calm and peaceful everything was. (I think we have been working him too hard)Anyway, on to the pictures: 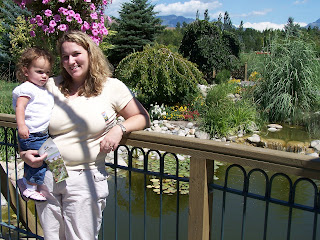 Bella and myself on the bridge of the Monet Garden. Bella is peeved that I wouldn't let her play in the lake. 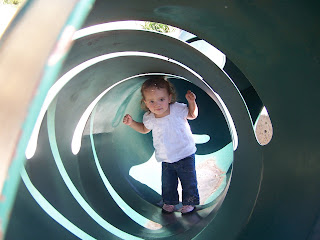 Bella inside the Caterpillar slide in the Children's Garden. 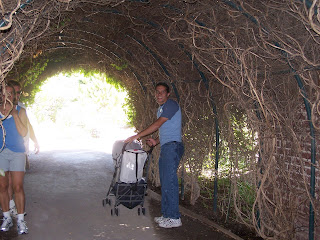 The Blue Prince in the Wisteria tunnel leading to the Secret Garden. 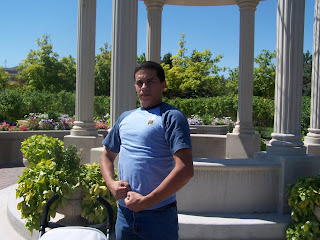 I told him to pose like a Greek God statue and this is what he came up with. I won't lie, I kinda like it. 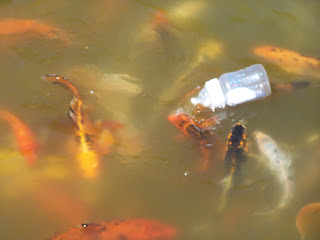 We were standing on a pier in the middle of the fish pond covertly throwing Cheerios to the Koi fish to make them come to the surface when Bella decided to join in the game and threw in her bottle. The fish proceeded to happily drink the milk out of the nipple. Through ten minutes of precise Cheerio throwing skills we were able to get the fish to move the bottle towards the shore where a valiant Blue Prince was able to pluck it out of the water. 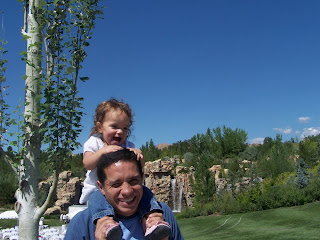 Here is Bella riding on Papi's shoulders and of course pulling his hair. She has recently developed a bit of a troubling violent streak. If anyone knows the best way to deal with screaming, hitting, face slapping, and head butting tantrums (I think she nearly broke my nose this morning, when it got in the way of a flailing head butt) I am all ears. 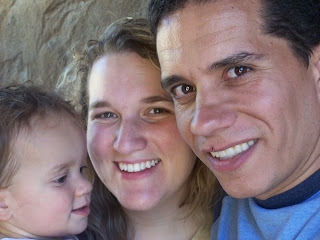 A family picture self-portrait by the Blue prince. He is generally very good at these.

i love all those photos. how fun. i would love to go there. it looks beautiful.

I checked out your blog based on the funny name :-). Thanksgiving Point is one of my family's favorite destinations, too.

So you and your husband and your terribly cute daughter are so fabulous that I think your sisters in So. Cal need you to update. More pictures please!