My day so far 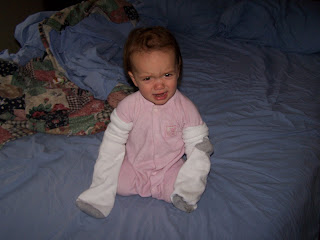 It's been one of those days. It started today with a very hungry and upset Bella waking up at 7:15am (15 min after the Blue Prince left for work, otherwise he would have thrown her a bottle in order to let me sleep). Not a huge deal, but she is now becoming this loud, indignant screamer which is somewhat hard to deal with that early. I decided to grab a bottle and the baby and bring her back to bed with me, with the hope that both of us could get an extra hour or two of sleep. The plan was working until at around 9am she started struggling with the covers and literally launched herself headfirst off the bed, did a flip, and landed flat on her back on the wood floor. The wailing didn't stop till I let her play with my cell phone. (she likes to hold the phone backwards to her ear while saying "hola" quite cute)


We then played on the bed a while with Papi's socks, which she enjoyed until she discovered that with the socks on both hands she can't take them off without help.

After breakfast Bella was toddling around as she is wont to do when she finds a small ladder/footstool that I had neglected to put away, and next thing I know: Crash--- Wail--- baby trapped under the ladder.


Hoping for a safe activity I put her in the baby saucer and popped in Baby Galileo while I got on the internet for a while. She watches happily talking to the puppets on the screen when suddenly she starts screaming and crying. I couldn't figure out what had happened to cause that reaction. Other than biting her tongue or getting her leg caught in a leg hole, there is little she could do to hurt herself in that contraption. I put her on my lap and rewinded the tape to see what had gotten her spooked. Apparently she is terrified of a specific cow puppet in one scene. Either that or it makes her very, very angry.


So hopefully I am done traumatizing my daughter for the day, but who knows it's only 5pm.
Anyone else care to share parental failings?

That is one cranky looking babe.

Cows are scary, I'll have you know. All of that mooing? And the udders?? *shudders*

Brian once tried to go stargazing out by the shores of the Great Salt Lake. It was really dark (no streetlights) and while we were setting up the telescope, we could suddenly hear cows. Lots of them . . . somewhere. Our logical minds knew that they were probably penned in a nearby field, but the fact that we couldn't see them gave us the jibblies. So, I can totally see where Bella's coming from.

As for kids and their amazing ability to injure themselves: it's uncanny, ain't it? Today, Eleanor was running down the sidewalk, and landed flat on her face, scraping up her little nose. On the way home, she said she would "run slowly" -- and she did, jogging in slow-motion (it was hysterical). But then she still managed to trip and land on her face AGAIN. Wow.