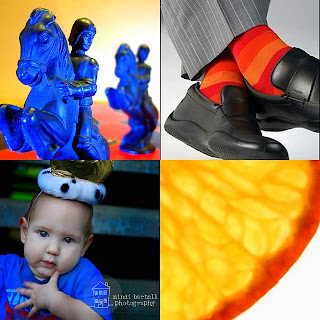 So I have been threatening for several weeks to actually start this blog and following my initial miss-start where I got all frustrated trying to get creative personalizing the blog with a cool header and such (way beyond my limited computer publishing skills), I decided that cool looking or not, I wanted to give it a try, so here we are.

Some may ask "What's with the funky title"? In reality it makes slightly more sense in Spanish but only slightly. For those who know me, you will be aware that my husband is from Uruguay (a small South American country near Brazil and Argentina) (no not in Africa and no not the land locked one in the jungle, that's Paraguay). Anyway when my husband and I were beginning our long distance dating thing he would often tease me asking if I had found my Principe Azul, (Blue Prince) which in English would be more like White knight or Prince Charming. As things progressed there was a time when I let him know that he was the only Blue Prince even in the running and he has been the only one for me ever since. So there you have the Blue Prince in our story.


As for the Orange Sock.... During my first visit back to Uruguay to see if there really would be any real life connection between myself and aforementioned Blue Prince, I had the opportunity to go to church in a ward where I had been a missionary for 7 months. While greeting everyone in the traditional Uruguayan style (one by one, a kiss to the cheek and heaven forbid if you miss someone) I ran into a older gentleman friend of mine asking if I had returned to find my "Media Naranja". I, having never heard the phrase before, could not comprehend what an Orange Sock had to do with anything. I found out latter that "Media Naranja" is a term meaning your soul mate or other half. Technically "Media Naranja" is best translated as Half an Orange but in my defense to all my Mexican Spanish speaking friends, in Uruguay socks are called medias. (Contrary to what one of my MTC Spanish teachers believed and made a huge deal over when it came up on our vocabulary list, but that is a story for another time).


I decided not to take the name Half an Orange because that was the name of one of the first blogs I started reading several years ago, unfortunately now defunct. It was the bilingual blog of a woman who was married to an American and serving as a diplomat for Peru in China with her husband and two small children, cool premise huh, I miss it.


So I guess you can say for this blog's sake I will be the Orange Sock and my husband the Blue Prince. We also have a little one, known here as Princess Bella, who is the real reason for most people to be visiting this blog. As you will see in forthcoming pictures she is incredibly beautiful and in order to protect her from kidnappers and paparazzi we shall attempt to protect her privacy. Anyway welcome to my blog:)

HUZZAH! Welcome to the blogosphere! I loved the story of your blog's name -- and of course, Princess B. is cute as always.

I'm excited to see pictures and hear stories of your family. Maybe, just maybe, someday I will jump on the bandwagon and get my own blog. AJ