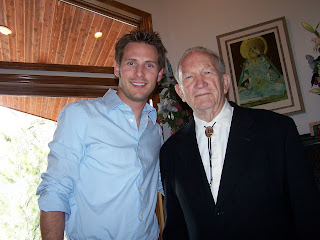 Michele wrote a comment asking who the these two good looking gentlemen were in my group of pictures. This is my Grandpa Van and my Cousin Van. Grandpa Van is my father's father who lives in Leeds near St. George. He has the best orchard I have ever been in. We stopped by his place on the way back from the Wedding and he filled us up with fresh cherries. I thought we had brought enough back for weeks but they are already gone.

Cousin Van lives with his wife in Arizona. He is going to Med School (following in the footsteps of his father) and will be starting his third year soon. Poor Sap.

My Grandpa Van once had the best personalized licence plate I have ever seen. It said "Van's Van" of course.

Thanks for answering the question! Van's Van - that's cute - unless it was on a truck. :)